President George Washington’s first January in office (in 1790 )was the warmest January on record at the Nation’s Capital, at that time Philadelphia. 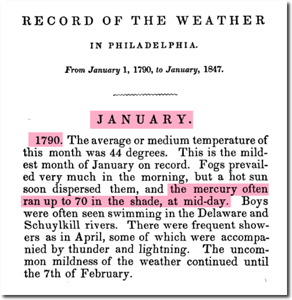 klik on text for enlargement

(bron: A Meteorological Account of the Weather in Philadelphia: From January 1 … – Charles Peirce – Google Books)

Snowfalls are now just a think of the past
(bron: The Independent, 20 March 2000)

"Britain's winter ends tomorrow with further indications of a striking environmental change: snow is starting to disappear from our lives".

After a brief mild spell, temperatures are set to dip again in April after the chilliest March in 21 years.

It is estimated that 20,275 Brits more than average died between December 1 and March

An additional 2,000 deaths more than average were expected due to cold conditions between March 23 and 31, this winter’s average death rates show.

Campaigners have called the deaths a “national tragedy” as cold weather victims fatalities could be prevented – especially in the elderly .
(bron: climatism.blog, 8-4-2018, posted by Jamie Spry)

Sledges, snowmen, snowballs and the excitement of waking to find that the stuff has settled outside are all a rapidly diminishing part of Britain's culture, as warmer winters - which scientists are attributing to global climate change - produce not only fewer white Christmases, but fewer white Januaries and Februaries....

However, the warming is so far manifesting itself more in winters which are less cold than in much hotter summers. According to Dr David Viner, a senior research scientist at the climatic research unit (CRU) of the University of East Anglia,within a few years winter snowfall will become "a very rare and exciting event".

"Children just aren't going to know what snow is," he said.